Now is the time to review your CFC description

As CFC charities are getting their 2020 campaign acceptances, now is the time to look closely at your CFC description. You can change your description when you pay the CFC’s “listing fee,” after you receive your acceptance.

In the past, you wanted to write as compelling a case as you could about your work and why it’s important…in 25 words.

Even as the CFC raises less, data suggests that promotion still helps many charities in the CFC

With CFC donations declining sharply this decade, especially the past two years, many charities are wondering if it still makes sense to invest in reaching out to CFC donors.

Donations through the Combined Federal Campaign declined again in 2018, though not nearly as much as they did the previous year, when the CFC rolled out its massive overhaul of the federal government’s fund-raising drive. 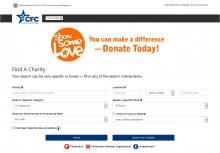 The Combined Federal Campaign underwent major changes last year designed to streamline the government’s charity drive and make giving easier and more efficient.  As with any major change, implementation wasn’t smooth, which hurt many charities.  Overall giving declined sharply, which has made this year’s campaign even more important for charities.

The list of eligible charities was issued August 2. Among other things, this allows the website consultants to start testing the online giving portal, which should take about a month. The materials for this fall's campaign were made available online this week.

With the federal charity drive declining since 2010, is it worth it to promote your charity’s work among potential CFC donors?

Two similar charities have answered this question in different ways since 2010, one continuing and expanding its CFC-focused promotion, the second cutting back to the point where it now appears to do little CFC promotion.

The two are Food For The Poor and World Vision. Both are large Christian charities with strong brands that work internationally.

The 2018 CFC fall campaign is far ahead of last year’s campaign schedule, a good sign that this year’s CFC will be much more successful.  Last year’s campaign plummeted nearly 40%, a loss of more than $65 million for charities.  One key reason: the campaign started far later than normal.

An Analysis by Charitable Choices

On April 8, 2013, the Office of Personnel Management released proposed rules for the Combined Federal Campaign. The rules call for some major changes, changes that could force many charities out of the CFC and cause giving through the CFC to plummet.

There are times when you wish you hadn’t been right.  Unfortunately, those who predicted the negative impact of many of the federal charity drive’s changes could not have been more right.

Last fall -- the year these changes were finally implemented – saw the CFC experience by far its biggest decline ever, both in total dollars given and number of donors.

The biggest changes in 30 years are being made in the federal charity drive, which is why the 2017 campaign is starting later than usual.