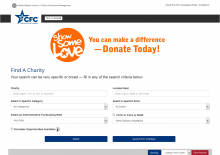 The long-awaited national CFC giving website – in many ways the centerpiece of the huge changes being made this year in the federal charity drive -- opened Monday, Oct. 16,

This fall’s Combined Federal Campaign (2017) will be run in a completely different way, the biggest change in the federal charity drive in 30 years. These big changes are why this year’s CFC is starting late and will run into January.

For donors, the biggest changes involve ways to cut the CFC’s costs.  The local organizations that used to run the 126 local campaigns (mostly United Ways) will no longer do so.  Instead there will be 37 regions, thus many fewer staff.

Officially, the CFC campaign began Monday, Oct. 2, about a month later than normal.  But there is still no official list of eligible charities.

The OPM release states that some charities responding to the hurricanes “will require additional time before they may accept solicitations.”

Several charities have told us that they are receiving significantly less of the donations pledged to them during the 2016 campaign.  One charity reported receiving just 57% of their pledged amount, far less than normal. Why is this?

Charities have never received all the CFC donations they are pledged, for two reasons.

This fall’s CFC campaign will be starting about a month later than normal and run into early January for the first time. The official start date is October 2.  The actual start date in at least some of the CFC’s 37 regions may be later than this.  Normally the campaign starts right after Labor Day.

A good way to reach Combined Federal Campaign donors in the DC area is the Post’s Express daily newspaper.  We’ve used it ourselves.

A better way to reach many more DC-area CFC donors is through Charitable Choices. If you can do both, that’s great.  If you can’t, please consider becoming part of Charitable Choices’ CFC charity guides, website and our other CFC promotional options.

This fall’s Combined Federal Campaign will be run in a completely different way, the biggest changes in the federal charity drive in 30 years.

How will all this impact the CFC and your charity this fall?

In the past, the most difficult part of the CFC application process has always been documenting a charity’s services and benefits, especially for a national organization, which had to document its services in at least 15 states. At the CFC’s 2017 application training, the CFC’s Marcus Glasgow talked a lot about how a charity should document its services, responding to many questions.

One of the biggest changes in the 2017 Combined Federal Campaign involved the application process.  Most of the changes will help CFC charities.

Charities that are already part of the CFC will only have to do a full application once every three years.  In the other two years, they submit a “verification application,” which is much simpler.

If your charity is new to the CFC, you must file a complete application your first year, then you won’t have to file another full application for three years.

For many CFC charities, deciding to re-apply is a deceptively difficult decision.  One factor: as many as half the charities in last year's CFC may drop out because of the new fees.