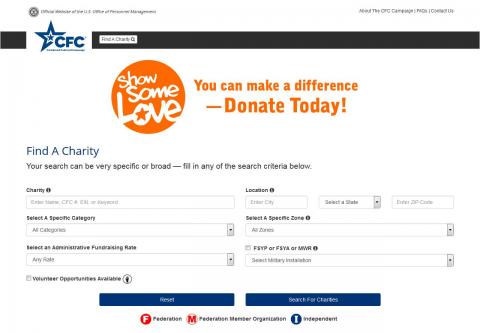 The Combined Federal Campaign underwent major changes last year designed to streamline the government’s charity drive and make giving easier and more efficient.  As with any major change, implementation wasn’t smooth, which hurt many charities.  Overall giving declined sharply, which has made this year’s campaign even more important for charities.

Fortunately, most of the kinks seemed to have been worked out and this year’s campaign started on time.  Plus, its new centerpiece – a new online giving portal – is working much better than it did last year.

For government and military employees, the new online giving portal will be the most noticeable change.  To donate, you can go to the new portal at any time: CFCgiving.opm.gov.  You don’t need to wait to receive your paper pledge card.

However, you can still use a paper pledge card, which you can download online. Here is the pledge card for federal and military retirees.

The new portal allows you to search for charities to support.  If you know which charity you want to support, you can input its name or its 5-digit CFC number. If you don’t know, you can search for charities in several ways.  None are perfect.  It’s not Google.  But you can learn about a lot of charities, all of which continue to meet the CFC’s standards, such as an annual audit.

When you find a charity online, you’ll get the same information you’d find in the CFC’s printed Charity Lists -- a short description of what it does, plus its address, phone number, web address and overhead percentage.

A way to get much more information about some CFC charities is to go to CharityChoices.com.  You can find charities by the area they serve (“Northern VA” or “International”) or what they do (“Medical Research,” “Environmental Protection,” “Military/Veterans”).  Each charity answers seven questions about its work, such as “Why should I support your charity’s work?” and “How can I be sure you will use my money wisely?”  You’ll also find much more information about the CFC and its recent changes.

Whichever charities you end up supporting, please give as much as you can.  Charities really need your support this year.