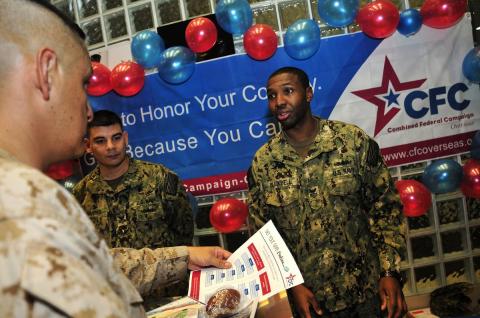 Donations through the Combined Federal Campaign declined again in 2018, though not nearly as much as they did the previous year, when the CFC rolled out its massive overhaul of the federal government’s fund-raising drive.

Part of 2018’s decline no doubt resulted from the government shutdown, which started during the last weeks of the 2018 campaign, a time when many employees make their payroll deduction pledges for the coming year. CFC Director Keith Willingham, who has managed the campaign since 2010, wrote that donations were "trending ahead of 2017" through Giving Tuesday (Nov. 27).  But then "the threat of and actual lapse in appropriations affected the campaign."

The Office of Personnel Management, which oversees the CFC, was one of the agencies shut down, stopping most CFC activities.  The campaign was extended twice, all the way to February 22, allowing for a final push.  But the campaign’s momentum was lost, plus employees who hadn’t been paid in a month weren’t in a good place to make donations.

Our best guess is that the partial government shutdown caused much of 2018’s 11% decline.  The last big government shutdown, in 2013, appears to have lowered CFC donations by about 13 percentage points (though it impacted every federal agency, not just about one in five).*

Many thought the 2018 CFC would rebound at least a little from the disastrous 2017 campaign, with its nearly $66 million decline in giving.  They hoped the big delays caused by the roll-out of the 2017 changes – plus the many glitches with the new online CFC giving portal – caused a lot of that 2017 decline.

The 2018 campaign started much earlier than in 2017, and the giving portal’s search engine functioned much better.  But the CFC didn’t rebound.

While the shutdown hurt, it’s getting harder not to blame the CFC’s big 2017 changes for the CFC’s big falloff in 2017 and 2018.  Most CFC charities opposed these changes when they were proposed in 2013, because they feared they would cause giving to plummet.

“It may not be helpful to say we told you so, but everyone told OPM that this was not going to work,” said Steve Taylor, United Way Worldwide’s senior vice president, in an interview with the Chronicle of Philanthropy.

Probably the most consequential change: the elimination of local campaign management.  Prior to 2017, local nonprofits – mostly United Ways – ran the 122 local CFCs.  In 2017, regional “Outreach Coordinators” began to run the 38 new “regional” CFCs, many of which encompass several states.  The Outreach Coordinators work for one of four private contractors, three of which are based in the DC area.  However, in 2018, a staff person was supposed to be based in each region.

But given the size of the regions, in most places, the CFC is no longer a locally-run campaign.  “Essentially,” writes Nonprofit Times Editor Ruth McCambridge, “…the CFC has replaced a community effort with a lonely and inefficient automated effort – one about as far from inviting as humanly possible – and it shows in the results.”

It’s not just that there are fewer events such as local charity fairs that connect employees and charities, events that require a lot of organizing.  It’s that there are far fewer connections between the people running the campaign and the people who make it work office by office: the “keyworkers,” the employee volunteers who hand out the pledge cards and remind people to get their donations and pledges in.  As anyone who works with volunteers knows, most need cultivation and appreciation.  Does an email from an Outreach Coordinator working in a distant office suffice? Most keyworker training is now done through online training sessions.

A major goal of the CFC’s big changes was to save money and increase the CFC’s efficiency.  Unfortunately, the opposite has happened: costs have gone up.

One result of the increased campaign costs combined with decreased donations: the percent that each charity must pay to cover the CFC’s costs has more than doubled to 20% of donations.  And this is in addition to the up-front fees that charities must now pay to apply and participate.

Some of this increase results from the loss of many employees who made smaller gifts, thus lowering the average gift.  Eliminating cash donations (another 2017 change) no doubt eliminated many employees who gave smaller amounts, such as soldiers and sailors.  Military donors have decreased by far the most with the new rules, falling from 183,985 in 2016 to just 46,410 in 2018, a stunning 75% decline.  While most cash gifts weren't large, they did add up to $20 million a year in donations.  And they no doubt helped jumpstart a practice of giving for many people.

The other positive with the 2018 campaign was a reported increase in giving by retirees, who beginning in 2017 could have CFC donations deducted from their monthly annuity payments.  Retirees gave about $500,000 in 2017.

One final positive from the CFC’s 2018 results: the big loss of CFC donations, combined with the increase in CFC costs, is putting more pressure on OPM to rethink some of its more controversial campaign changes.

“Frankly, OPM is delusional in thinking that they can make some little tweaks around the edges and fix what is a fatally flawed structure,” said the United Way’s Steve Taylor.  “To fix it, they have to reopen the rules.  Either Congress has to force them to reopen the rules or they on their own are going to have to.”

NEXT: How to fix the CFC: Steps OPM could take now to start restoring the CFC.

**The budgeted costs of the 2017 and 2018 campaigns are probably very close to the actual costs since they are determined by just five contracts: with the four contractors plus the contractor that runs the CFC web portal and administrative functions.