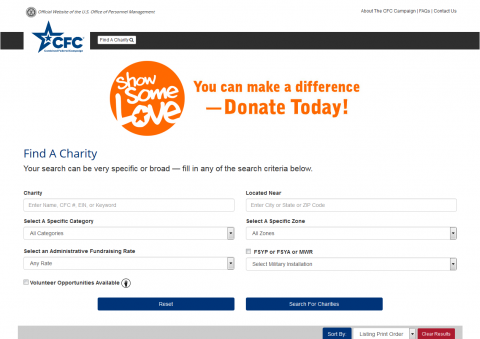 The long-awaited national CFC giving website – in many ways the centerpiece of the huge changes being made this year in the federal charity drive -- opened Monday, Oct. 16,

The new website address is CFCgiving.OPM.gov.  Federal employees and military personnel can use this web portal from anywhere in the world.  In the past, each local CFC campaign had its own website.

All CFC donations will be processed through this national website, which is part of the CFC’s new “Central Collection Agency,” or CCA.  Even donations given using a CFC pledge card will be inputted into the central website.  The CCA will then collect and distribute donations as they are made, usually throughout the following year (for donors using payroll deduction).

In the past, donations were processed by each local CFC (125 in 2016), then paid either directly to a charity or through that charity’s CFC federation.  The federation would then pay the charity.  The new centralized system will obviously be a more efficient way to process donations.  It is expected to significantly lower the CFC’s costs, which in the past had been paid out of each charity’s donations.

For charities that want to reach out to CFC donors, highlighting this web address makes sense.  It gives your donors a way to immediately make their donations or pledges without waiting to receive a paper pledge card.

The search engine driving the new website seems better than the search engines on the previous CFC websites.  People can search on your charity’s name, CFC number, EIN number or location.  They can filter charities for CFC zone, state or city, category (“Animal-Related,” “Medical Research,” “Public and Societal Benefit,” etc.), or fund-raising percentage.

One problem with the search engine is that it's very sensitive to small changes in a charity's name.  As a result, if people try a name that isn’t quite the same as your CFC name, you may not come up. One example is A Child’s Hope Fund.  On the CFC website, its name does not include the apostrophe: “A Childs Hope Fund.”  If you use the apostrophe in your search, it doesn’t come up.

So it’s a good idea to go to the CFC website and experiment with various ways of searching for your charity.  (When you do this, remember to “reset” your search criteria each time you do a new search, or your charity may not come up.) You’ll then know what to tell your CFC donors.  Searching on your CFC number is the best way for people to search for you, but 5-digit numbers can be hard to remember when a donor is at work.

For charities in CFC federations, their locations are listed according to where their federations are based, not where the charities are based.  For example, Children’s Food Fund’s office is in zip code 91773, San Dimas, CA.  But it is listed as being based in Ashburn, VA, the location of its federation (Christian Service Charities).  If you search for charities in the 91773 zip code, Children’s Food Fund does not come up.  We assume this is a glitch that will be fixed over time.

If your charity is close to the 10% or 25% thresholds, getting your overhead costs under these thresholds would be smart to do, if possible.  The CFC’s overhead percentages are based on the 990 report submitted with each charity’s application.  Applications are submitted during the prior fall or winter.  The percentage cannot be changed on the CFC’s website if a more recent 990 shows a lower percentage.