Together we build a world without violence.

Creates homes safe from abuse by offering a domestic violence shelter for women and children, a rape crisis center, a homeless shelter for families and a food pantry.

Every gift is important to us. We depend on the community for almost 30% of our annual budget in order to maintain our high quality of services. Funds from government sources and private foundations are often designated to fund new programs for only one or two years; in order to continue successful programs after the implementation period, we need support from the communities we serve.

Our mission is not only to aid those who have experienced abuse, but, through education and outreach, to break the generational cycle of violence and build a world without violence.

We provide services to adults and children who have experienced domestic violence, sexual assault or homelessness, and prevention education to the community. Our services include a 24-hour crisis line, 30-bed domestic violence shelter, affordable counseling, rape crisis response, low-cost restraining orders and community education. Homeless services include a 16-bed shelter for homeless families and a food pantry.

Domestic violence and sexual assault affect all of us. Studies by the Department of Justice and other agencies indicate that one in four young women and at least one in six young men have experienced some form of sexual assault or abuse by age 18. One in 12 American women will be stalked, most likely by a current or former romantic partner. Depending on where you live in the U.S., as many as one in three female homicide victims were killed by a current or former romantic partner. Growing up in a home where there is domestic violence is the biggest predictor of who will become abusive or abused in their own adult relationships.

It is estimated that there are 200-300 homeless in the Tri-Valley area on any night. Unlike large urban cities, these homeless families are often hidden from view. Many are working poor who are unable to save enough to make the first and last months’ rent plus deposit on an apartment. They sleep in motels, in their cars or on friends’ floors and must spend much of their hard-earned income on fast food meals. Chronic homelessness leads to depression, substance abuse and violence toward oneself, family members and society. Homeless children are at risk for dropping out of school, delinquency and teen pregnancy.

We believe that world peace begins at home. When every home is a stable and safe place where all members of the family are treated with respect, and disagreements are resolved peacefully, terrorism and war will cease to exist.

In 2011, we answered 1,968 crisis calls, sheltered 320 women and children in our domestic violence shelter and 97 adults and children in our homeless shelter, provided counseling and advocacy to 421 people in the community, feed over 7,253 individuals through our food pantry and gave community education presentations to 4,162 people.  We also served 234 people through our Rape Crisis Center.

We continue to hear from former clients years after their Haven experience. One Christmas, a young man who had stayed at the shelter with his mother ten years prior brought in a donation of over $200 that he had collected from his coworkers after telling them how the Haven had assisted his family. A woman who stayed at the shelter with her two youngest sons over 10 years ago was able to become a straight-A student at a local community college and traveled to Romania with a group from her church to help construct a new building for an orphanage. A mother and daughter who stayed at the Haven in the late 80’s returned to Tri-Valley Haven to complete our volunteer training program in order to help others in need.

Even clients who choose to return to a batterer rather than complete the program are small success stories. Leaving an abusive relationship is a process, and many women leave six or more times for short periods before leaving for good. During their short stay, they will have received information and support that will help them to prepare to make a final break from abuse.

Tri-Valley Haven began over 30 years ago as a network of dedicated volunteers who opened their own homes to battered women and their children and a crisis line based in a founder’s garage. We have expanded the agency by listening to the needs of the community and strategic planning. Our administrative and fundraising costs combined are only 9% of our total budget. Service is our first priority. 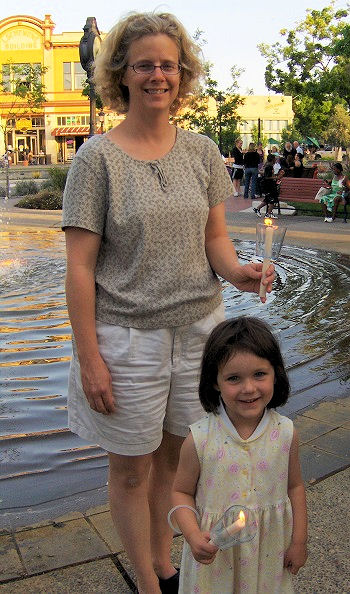 Domestic violence and sexual abuse affect all of us.