The Nature Conservancy is a global environmental nonprofit working to create a world where people and nature can thrive.  Learn more at nature.org.

The Nature Conservancy Partners with U.S. Navy Personnel for Anacostia River Clean-up
Give Online Now Give through the CFC Now

Founded in the U.S. through grassroots action in 1951, The Nature Conservancy has grown to become one of the most effective and wide-reaching environmental organizations in the world. Thanks to more than a million members and the dedicated efforts of our diverse staff and over 400 scientists, we impact conservation in 75 countries and territories: 37 by direct conservation impact and 38 through partners.

Our mission is to conserve the lands and waters on which all life depends. To achieve this, we must boldly address the biodiversity and climate crises over the next decade. By maximizing our ability to affect change between now and 2030, we can shape a brighter future for people and our planet.

The actions we take over this next decade will define the planet's path over the next century. The Nature Conservancy is urgently taking on the dual threats of biodiversity loss and the climate crisis, maximizing resilience and benefits for communities.

What we achieve is just as important as how. By letting science guide our focus and equity guide our execution, we can shape a better 2030 for our planet.

Every acre we protect, every river mile restored, every species brought back from the brink, begins with you. Your support will help take action on the ground in all 50 states and more than 70 countries.

From our historic work in land acquisition to cutting-edge research that influences global policy, The Nature Conservancy is constantly adapting to take on our planet’s biggest, most important challenges. Our vision is a world where the diversity of life thrives, and people act to conserve nature for its own sake and its ability to fulfill our needs and enrich our lives.

Here is a selection of achievements that The Nature Conservancy oversaw in fiscal year 2020:

A Global Strategy to Save Rivers: WHILE THE BALKANS are home to many of Europe’s last free-flowing rivers, the region has become a target in recent years for plans to develop new hydro dams and other water projects. Despite the threats, The Nature Conservancy’s efforts in the region last year helped protect two rivers: the turquoise blue waters of Montenegro’s Zeta River and, to the north, the Krupa River in Croatia, which winds through steep and rocky canyons.

The two governments protected the rivers using TNC’s new community focused approach to river conservation known as the Durable River Protection framework. Modeled on the U.S. Wild and Scenic Rivers Act, the framework brings new policy approaches that can support freshwater protections around the world. This is critical because rivers hold much of the world’s biodiversity but are, astonishingly, the least protected of the Earth’s natural systems. The success in the Balkans will help support adoption of the framework in other countries as well.

Closing the Biodiversity Financing Gap: THE WORLD’S BIODIVERSITY is under threat. The rate of extinctions is on the rise and climate change is now exacerbating the threats. Declining biodiversity will have real impacts for people, such as threatening clean-water supplies and limiting food sources. For example, threats to pollinators could lead to a costly drop in agricultural output estimated at $217 billion annually.

A new paper, Financing Nature, published by the Paulson Institute, Cornell University and The Nature Conservancy, outlines transformations in policy and finance regulations that would unleash new private-sector investments capable of protecting nature and biodiversity.

A New State Park Transforms a Colorado Town: FOR DECADES, RESIDENTS IN the former mining town of Trinidad, Colo., had been watching young people leave for distant job opportunities. In 2017, Mayor Phil Rico decided to approach The Nature Conservancy and The Trust for Public Land (TPL) with a plan for change: Would the organizations help protect a neighboring ranch with an eye toward transforming the city into a thriving hub for outdoor recreation?

Last year, that vision came to life when the property was made into a state park crowned by the 9,633-foot Fishers Peak. After TNC and TPL purchased the 19,200-acre ranch with support from Great Outdoors Colorado, the two groups helped Colorado Parks and Wildlife acquire the $25.4 million property and transform it into Fishers Peak State Park. It promises to become an outdoor tourism destination on par with the scenic natural wonders that already contribute $62 billion to the state’s economy.

The park is home to more than 900 species—including elk, bobcat and peregrine falcon—and helps secure a wildlife corridor from the Sangre de Cristo Mountains to the grasslands of the high plains. “By planning for both ecological and recreational goals from the ground floor, we’ll strive to show how solid conservation outcomes contribute to an economically thriving community, all while connecting future generations to nature,” says Matt Moorhead, TNC’s conservation partnerships advisor in Colorado.

Switching to Less Thirsty Crops Uses 50% Less Water and Inspires New Opportunities: IN ARIZONA’S VERDE RIVER VALLEY, a commonsense shift on the land has meant big changes where it counts: in the life-giving waters of the Verde River. Flowing from highlands in central Arizona, the 190-mile-long Verde and its streamside stands of willow and cottonwood are a wellspring of life. The river also irrigates dryland farms and supplies communities with drinking water.

Recently, the river has been so over-tapped that sections have run dry during summer, threatening the viability of some farmlands and the survival of a rich diversity of wildlife, including two endangered fish species.

To address the problem, The Nature Conservancy, together with local partners in business and farming, proposed a change that seemed capable of doing the impossible: saving precious water while growing marketable crops and inspiring the growth of a new sector in the local economy. In short, TNC worked with the largest farm in the region to switch to barley, which consumes half the water of thirsty crops like alfalfa and corn. And TNC helped support a new company to process the barley for use in beer.

In just three years, the shift to high-quality malting barley has been a big hit with local brewers, saved 425 million gallons of water—enough to fill more than 600 Olympic-sized swimming pools—and kept the Verde River flowing.

Mobile Phone App Provides a Lifeline for Farmers Helping to Save the Amazon: IN THE BRAZILIAN AMAZON, small-scale family farmers have driven approximately one-third of the total loss of rainforest by cutting down trees to create farm fields and cattle pastures for subsistence and income. But since 2012, The Nature Conservancy and the government of the state of Pará have been providing technical assistance and training to encourage farmers to grow cacao trees—the source of chocolate—to reforest degraded lands and to provide a more sustainable source of income.

Last year, however, as harvest time neared, COVID-19 hit Brazil, making it too dangerous to conduct in-person training. The Conservancy turned to a mobile-phone based social-messaging app to deliver how-to videos to some 250 farmers in time to help with the harvest.

This gift, the second largest ever received by The Nature Conservancy, jump-starts our pioneering work to harness nature to reduce carbon emissions around the world.

The Nature Conservancy is one of the most effective and efficient environmental organizations in the world.

We are able to accomplish so much because we make careful use of our resources, maximizing the funding that goes toward our science-driven program work. Our program efficiencies meet standards set by both Charity Navigator and the Better Business Bureau Wise Giving Alliance, meaning you can be confident that any investment in The Nature Conservancy will be put to good use. 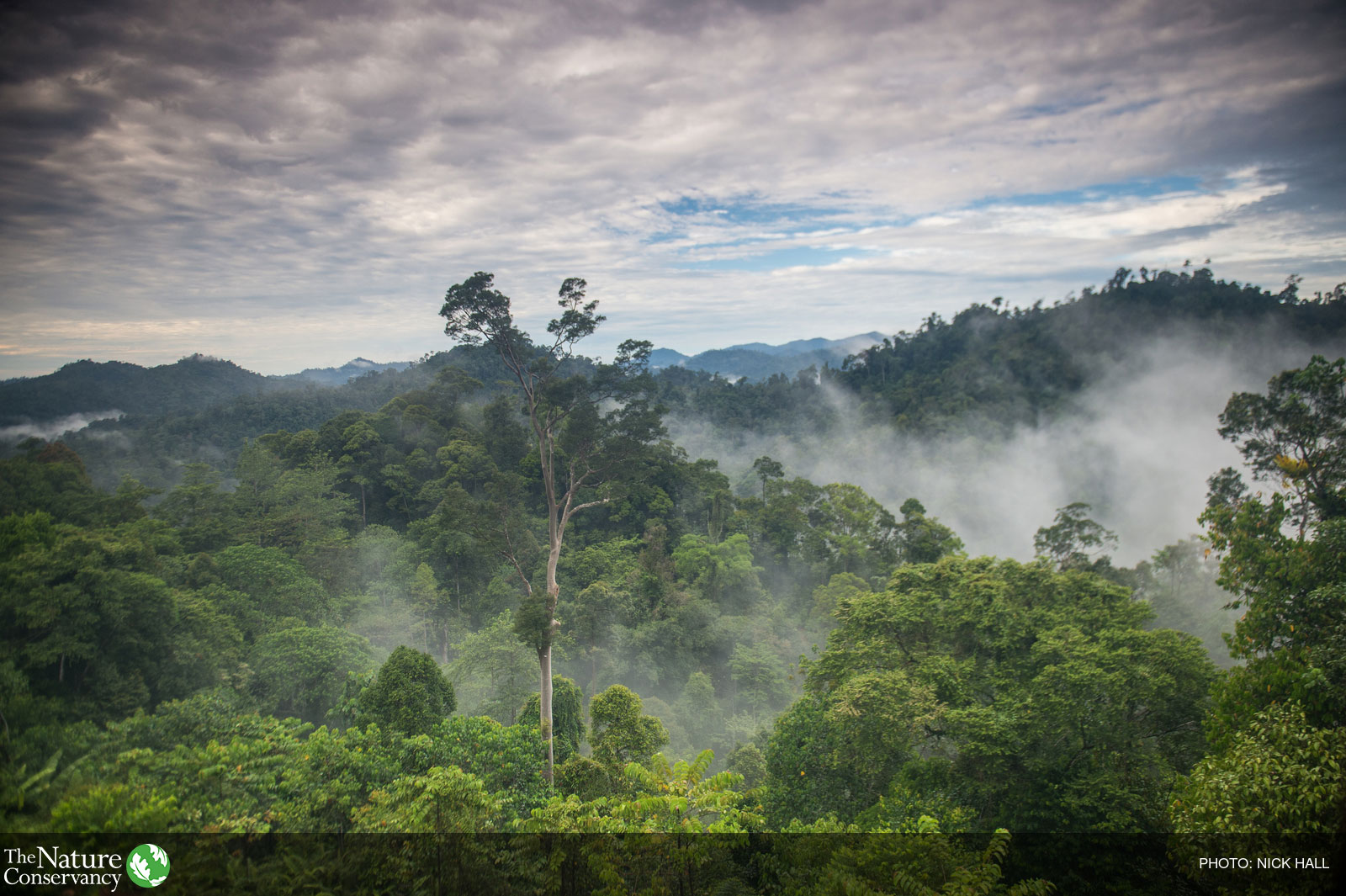 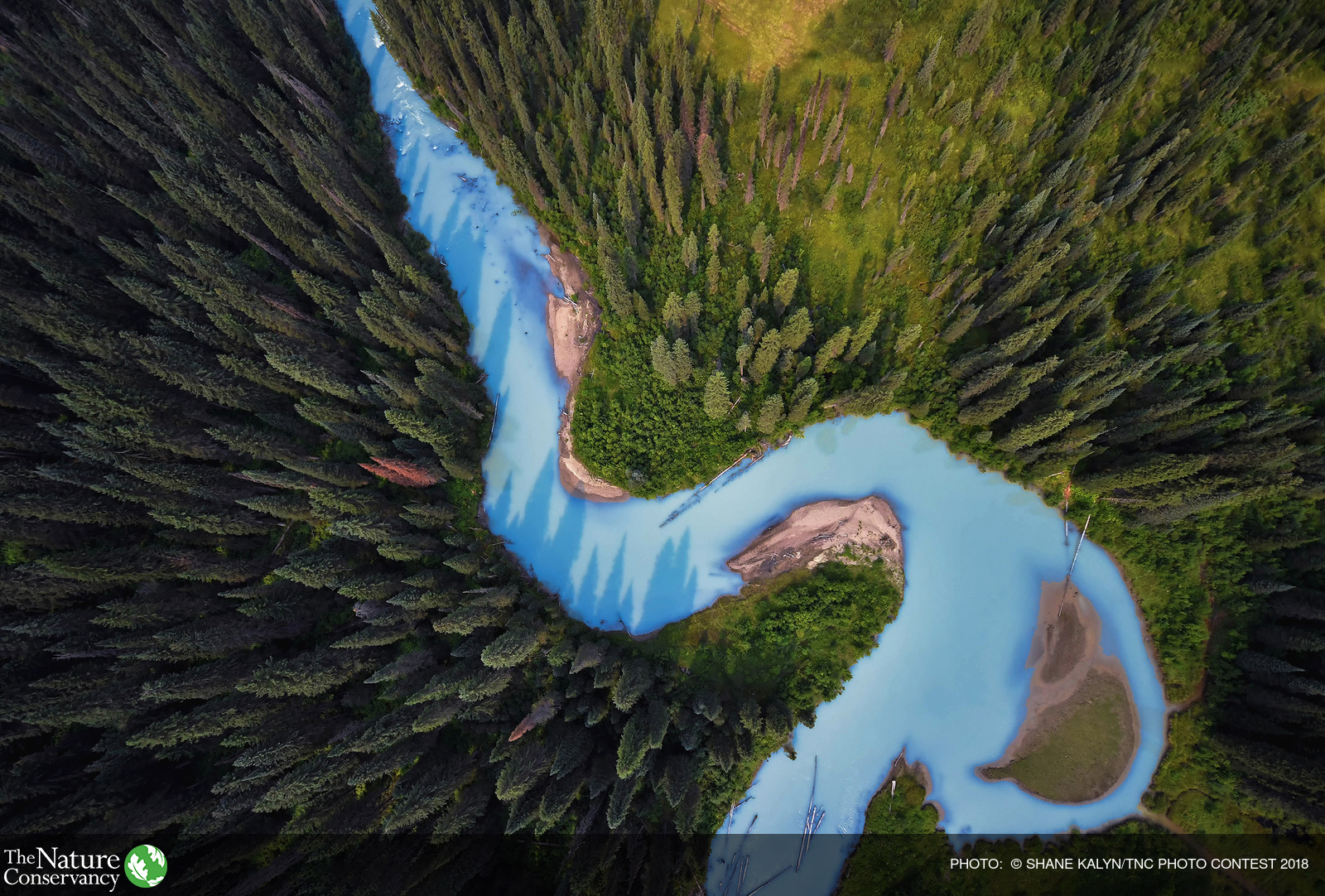 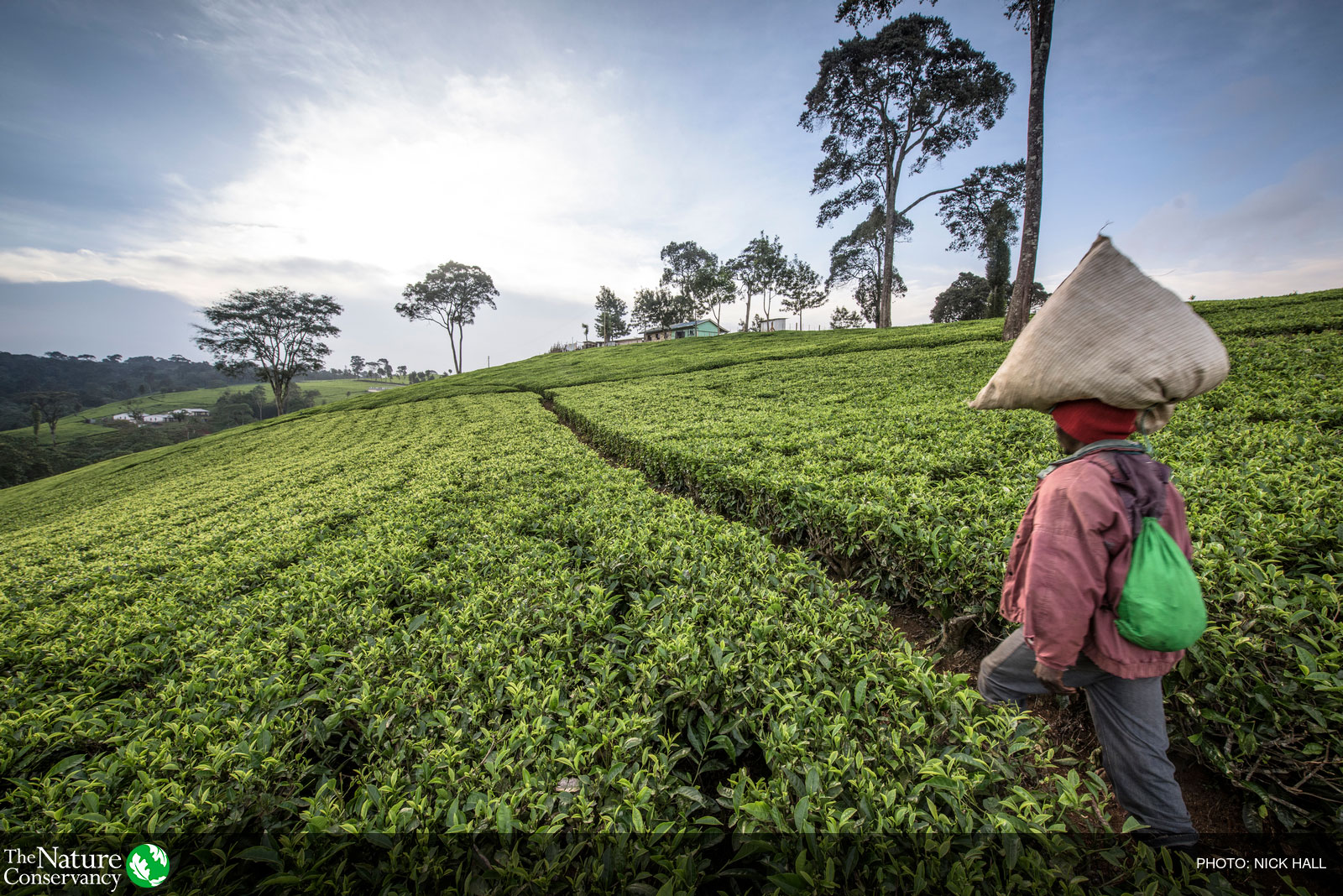 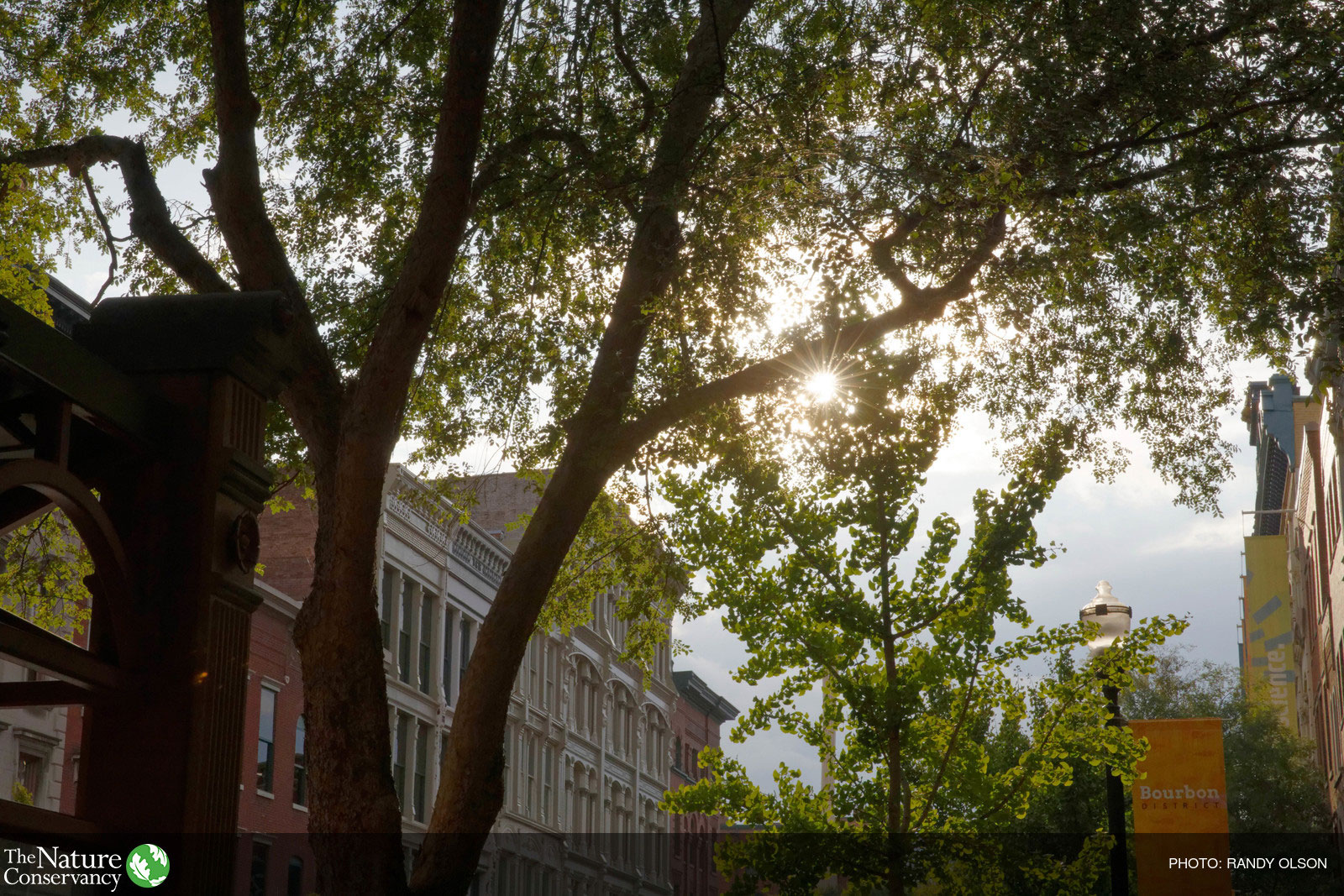 Trees on the corner of 7th and Main St. in Louisville, KY. Photo: © Randy Olson